The Intertribal Agriculture Council (IAC) through its Great Lakes office in Wisconsin is proud to participate in a cooperative effort with the Wisconsin Department of Agriculture, Trade and Consumer Protection called “Buy Local, Buy Wisconsin – Wisconsin Wild Rice to Madison” during the 2015 and 2016 ricing seasons. The effort, which calls for the purchase, processing and marketing of wild rice into Madison, Wisconsin in a test approach, has allowed some analysis of both supply and demand, and marketing needs for this traditional culinary treat revered by Indigenous people through-out the Great Lakes.

Not only did the project allow for test marketing of the processed product, but a chance to look at some historic comparative analysis of production levels, processing techniques and the current availability of “off the lake rice” from Native harvesters in regional use hubs. We were also able to take a brief look at how, and where wild rice is currently being utilized or under utilized in tribal and non-tribal communities. These regional hubs contain both rice beds of limited supply, over harvesting and areas of abundance.

Wild Rice bed near the end of the ricing season in Northern Wisconsin.

The project also began with some contemplation of how the BLBW project could co-exist with other goals within the Native community that helped set some priorities embracing Indigenous consultation and reflection. Those goals included: 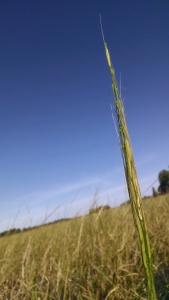 Wisconsin has a unique history recognized in the historic narratives of the Ojibwe people and their migration into the Great Lakes region, hundreds, perhaps thousands of years ago over in successive waves from the east coast.

The Ojibwe pursued this region because of a prophecy for finding a new homeland by “going to where the food grows on water.”

Even the Menominee Nation, embracing the story of their own migration here, and their birthplace on the Menominee (Minomin) River take their name from this plant, MinoMin-Innini the Good Seed (Minomin), Innini (Men) makes their history, and historic ties to the Ojibwe as the “People of the Wild Rice” and their homelands along the northern Menominee River where rice was once abundant, a tantalizing tale of spiritually, deep culturally based history or as simple as having a taste bud for wild rice in its’ raw and value added forms. Many of these same tribes historically engaged in warfare to defend, and harvest “their” rice beds.

And as recorded history will show you, in the longest of wintry seasons, wild rice became a saving grace in order to see another spring. The Anishinabeg people of the Great Lakes understood this and hold it in great reverence to this day.

“Buy Local, Buy Wisconsin” co-exists with a rich history of Indigenous people utilizing rice as both a staple and trading commodity that found itself as afar as the great trading market places of Walla Walla on the Columbia River of Washington State (according to Yakama historians and treaties) and at the same time coveted as “wild oats” by explorers and businessman in contemporary history purchasing east coast commodities as well.

A 1864 report on the Lac Courte Oreilles Ojibwe of Northern Wisconsin says that over $26,000 dollars ($397,964 in 2016 values) was made on the sales of wild rice that year comprising over 30% of the entire tribal economy at LCO.  Wild rice was followed by maple sugar with $15,000 in sales ($229,595 in 2016 values) representing almost 50% of the tribal economy at LCO that year. A later report by the Bureau of Ethnology in 1897 indicates that over 30,000 Native people in the region are utilizing wild rice as a primary commodity and that many of the Indians had finally “stopped roaming.”

This 1937 photograph shows Paul Buffalo and wife parching wild rice in metal tubs over a fire at their Minnesota camp. National Archives Photo

But modern activities of human beings, many of them recreational in nature, made harvesting the once staple product a much rarer opportunity. Recreational use of lakes leading to small dams, berms and higher water levels for water craft use, sewage facilities and general pollution have reduced the availability of rice in Wisconsin from its historic levels. Praire Lake (Muskkodaminominekin or Prairie Rice Lake) near Cameron, Wisconsin the report reads, could “feed a body of 2,000 easily,” but is now void of wild rice. And while several agencies like the Great Lakes Indian Fish Wildlife Commission and individuals tribes along with support from state and federal agencies have worked to reestablish the commodity over the last two decades, renewed interest in ricing by both Native and non-Native constituencies in Wisconsin, unlike Minnesota, have made widespread, large exports of wild rice nearly impossible to achieve.

The BLBW program grant allowed the IAC representatives however to purchase several hundred pounds of wild rice off a number of different lakes in what is known as the “ceded territory” of the Ojibwe people, some twenty-five counties of northern Wisconsin bearing the most prolific of the wild rice beds remaining.

Wild Rice from nine different regional lakes and at the far right, a sample of kettle parched and popped rice. This display is an example of the color diversity of wild rice, which coincides with rice with different DNA, lake conditions, (sand, mud, gravel, lake, river, etc.) and processing techniques from which is created some subtle differences in cooking times and taste as well.

In that context, we found several regions and lakes worked by local tribal members to their practical capacity, some showing increased pressure and bad use practices that have followed from the competitive use by both tribal and non-tribal ricers. On the other end of the spectrum, we found a couple of counties and lakes where it appears that there is little to no competition for ricing, and perhaps even an under utilization of harvesting, both leading to wasted wild rice, and less reseeding, a natural by-product of harvesting using Native knocking sticks and practices that allow rice seeds to fall back into the water.

Harvesting with “ricing sticks” allows some rice to naturally fall back into the water for reseeding.

At each of the lakes, many which should remain unnamed to protect the beds from over use, we found many ricers willing to part with small amounts of their “off the lake” and later on, processed and finished wild rice. The majority of tribal and non-tribal ricers continue to harvest now days for home, holiday and ceremonial use and the labor intensive effort of knocking and processing wild rice, like sapping maple is one in which many gauge their use needs over the next year, and that ends their harvest season.

During the fall of 2015, the IAC through its Mobile Farmers Market participated in the annual Taste of Madison held on the Capital Square. There over 1,500 samples of using wild rice was presented and purchased by participates on three plates offered at the stand, #1: Wild Rice brats and bun, #2: Red Lake Walleye or Red Cliff Whitefish on a bed of Wild Rice, and #3: a Wild Rice cold salad with blueberries, nuts and other Native ingredients.

The Wisconsin Lakes brand of wild rice was also used recently in Hopkins, Michigan where a national Native foods summit (Great Lakes Intertribal Food Summit) drew a couple of hundred participants to sample, trade and help develop a Native culinary agenda for promoting healthy Indigenous foods. The summit was also used as a model to increase the scale of use, and by example, exemplified the use of wild rice in brats and meat loafs, flours, soups, stuffing, salads, breads and perhaps in the future, drinks as well.

As we engage with ricers through out the region, it becomes apparent that there is great enthusiasm for the potential of wild rice in the future. Not only are tribal agencies, tribes and the State of Wisconsin engaged in positive projects that might allow for the reestablishment of former ricing beds as water quality and reseeding allows, but the demand for wild rice in the development of secondary, value added products like energy bars (wild rice, venison, cranberries and maple), batters, stuffing and general cooking practices coincides with a national awareness of Farm to Table, and Forest to Table initiatives in an atmosphere of eating local healthy foods.

We look forward to a healthier, wild taste to future cuisine of our local foods, local medicines, local forest grocery store as the forest to table concepts emerging from a new look at old and ancient foods continues.